Minneapolis, Minnesota (May 17, 2016) – New Listings showed a second year-over-year decline in 2016 while pending purchase activity rose for the 17th straight month. Buyers signed 6,373 new purchase agreements, a small but important 1.6 percent gain compared to a record-setting April 2015. Due to the well-known supply shortages in our market, would-be sellers are concerned about their ability to secure their next property in the current environment. Inventory levels fell 19.4 percent to 12,849 active properties. Because of record demand, weak supply and a more expensive mix of homes selling, the April median sales price rose 7.7 percent to $231,500. Median list price, by contrast, has already reached and exceeded its previous record, perhaps an indication that the median sales price could do the same this year.

As was the case in March, serious buyers came out swinging in April. In fact, sellers had the same chance of getting offers above their current list price as they did below. Those odds were exactly fifty-fifty—as they were in 2005. That’s not the case for original list price, which indicates that once a home is properly priced, serious buyers are willing to write full-price offers. Unsurprisingly, homes tended to sell in less time, with cumulative days on market declining 14.1 percent to 73 days. That’s the lowest April figure since 2007. Months supply of inventory fell 27.8 percent to 2.6 months—the lowest April figure on record going back to 2003. Generally, five to six months of supply is considered a balanced market. While our region as a whole is favoring sellers, not all areas, segments or price points necessarily reflect that. 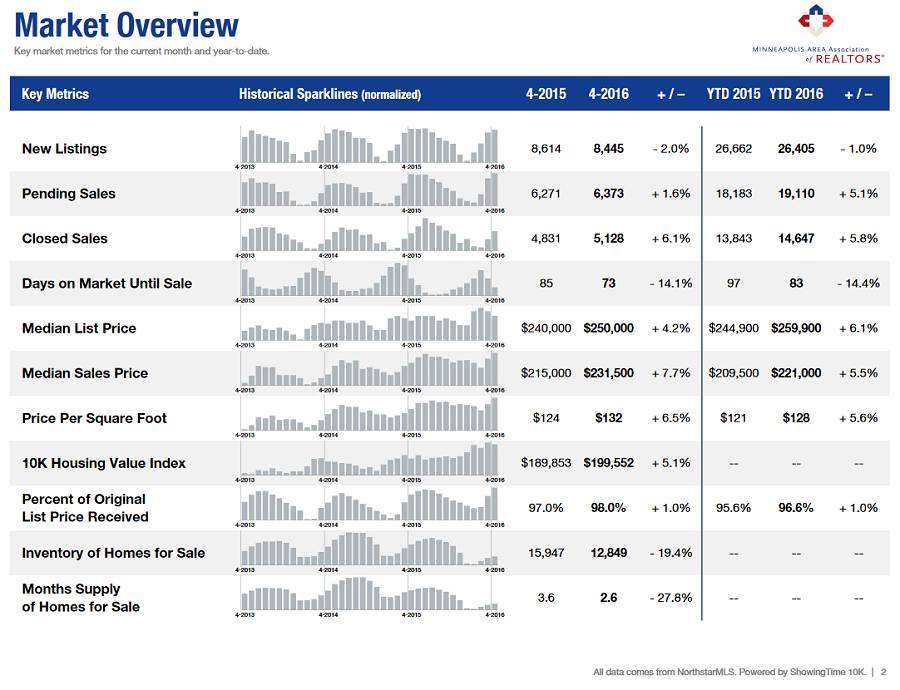 “This is an important milestone that speaks to the health of our market,” said Judy Shields, Minneapolis Area Association of REALTORS® (MAAR) President. “Sellers should not interpret this to mean they are guaranteed offers above their list price. Every price range, area and segment is still unique. It’s more important now than ever to properly price your home. This means buyers–particularly those in multiple offers–should be ready to make full price offers on the properties that best fits their needs.”

The last time absorption rates, consumer demand and home prices were where they are today, the median percent of current list price received at sale was also 100.0 percent, so this isn’t entirely unfamiliar territory. There was also significantly more inventory in 2004 and 2005. The marketplace is finally closing the gap from the recession before advancing—sustained by smarter lending policy, job and wage increases, population growth, the risk of higher interest rates and relentlessly rising rents. It’s worth noting that traditional sales tend to fetch a higher ratio of sales price to list price. For the first April since 2007, traditional sales made up over 90.0 percent of overall sales, which boosts the
percentage of current list price received.

The national unemployment rate for April was unchanged at 5.0 percent. With a local unemployment rate of 4.0 percent, the Minneapolis-St. Paul-Bloomington metropolitan area was among the top ten large metros with the lowest unemployment rate. The 30-year fixed mortgage rate continued to hover just above 3.6 percent compared to a long-term average of about 8.0 percent. Rates took a surprising dive after the Federal Reserve announced the first hike last year. Marginally higher rates were widely expected in 2016, even though a June rate hike seems unlikely.

“The economy is still strengthening and the market is very competitive,” said Cotty Lowry, MAAR President-Elect. “Serious buyers must be prepared to make strong offers right away or risk not having their offer accepted.”